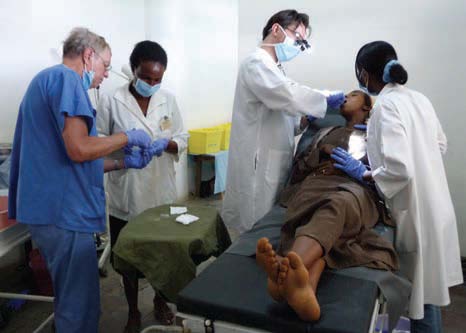 Looking out the airplane window, on about the twelfth hour of a fourteen hour flight to Ethiopia, the hazy streak of water I’d been watching suddenly divided in the Sahara dust. The map suggested we were flying over Khartoum, where the White Nile and the Blue Nile become simply the Nile, en route to Cairo.

As the plane followed the White branch southeast towards Ethiopia, it began to sink in that our team of twentyplus healthcare volunteers was getting pretty far from home.

With two dentists, two plastic surgeons, one obstetrician and an assortment of nurses and students, the International Medical Relief team arrived in Addis Ababa and then flew to our destination of Mekele, a remote city in Northern Ethiopia not far from the Red Sea.

Walking into the Mekele Hospital the next day, we found several hundred prospective patients on hand to welcome the Americans. Word had gotten out, with demand for healthcare apparently quite profound in one of the poorest regions of the eighth poorest nation on earth.

I was informed that 305 individuals had gathered around the dental clinic, marking a spectacle of far-flung chaos. The dental team lugged its bags and suitcases through the crowd and into the clinic, laid out instruments, set up a sterilization area and started the screening process.

Along with Dr. Don Vollmer of Castle Rock, and Keren Etzion, a pre-dental student from New York, we took down each name and set up basic treatment plans and arranged general appointment times for the week ahead. We were joined by two capable Ethiopian dental technicians and eight nurses who rotated into the clinic.
Dr Matt Dunn perforaming dental work on patients in Ethiopia
Over the next five days we worked our way through the list of patients. One after another, with subsequent patients thronging the doorway. The most necessary procedure, by far, was the extraction. Some patients required scaling and debridement — with periodontal disease almost universal in the area — and some inquired about fillings. On the occasional tooth which afforded reasonable access to a spoon excavator, we carefully placed Geristore dual-cure restorations and hoped for the best.

The dental chair was a creaky 1973 Dental-Ease model which could be moved up and down if you held the wires just right around the plug-in. A bent-arm lamp was used to help with lighting, though my battery-pack loupe light attachment proved indispensable.

It was a definite jolt to the standard dental routine to find myself working in a small, hot room with a dozen spectators around the chair chattering in Tigrigna, with dozens more clamoring outside waiting to get in. Working during the August monsoon season, a string of afternoon rain storms battered the tin roof of the clinic, offering the sensation of doing dentistry to the sound of machine-gun fire overhead.

The electricity often went out during these storms, leaving the clinic room completely dark save for a beam of LED light between my forehead and the tooth I happened to be working on. As the days went by, focused and intense, I realized I had stopped noticing when the power had gone off — just kept on working away.

Though many of the Ethiopian patients were living with staggering levels of suffering, in terms of their dental and overall health, I was amazed by their optimism and good cheer. Quick to smile, quick to laugh, you wouldn’t imagine that Ethiopians have endured the history of famine, war and dictatorship that they have.

I’m not exactly sure what to make of that, nor am I sure how best to respond to such scenes of hope and heartbreak, courage and happiness against the odds. But I do hope to find time to work again in Ethiopia someday, and am thankful for the chance to have spent some days in the Mekelle Hospital last August.

Special Thanks to Bev Carroll at Sullivan-Schein for donating some of the supplies used in the dental clinic. Also, special thanks to Shauna Vollmer- King of International Medical Relief. Also, thanks go to Keren Etzion for contributing to this article.